Medicare Part D plans (or their pharmaceutical benefit manager, PBM) set the retail prices for your formulary drugs at each standard and preferred network pharmacy.

As a note:  In our Q1Rx® Drug Finder (Q1Rx.com), we show all Medicare Part D plans or Medicare Advantage plans in a Service Area (state or ZIP code area) that provide coverage for a particular formulary drug, and when available, we also show the Medicare plan's "average negotiated retail drug price" and this "average" price means that the retail drug prices are the average retail drug price across all network pharmacies (standard and preferred) in the plan’s Service Area.  In many cases, we find that the average negotiated retail price we show in our Drug Finder accurately reflects what you may find at your chosen network pharmacy.

However, even though we update this drug pricing data on a regular basis, your actual retail drug price depends on how your Medicare prescription drug plan (PDP or MAPD) has negotiated with the standard and preferred network pharmacies in your area - and how that retail price has changed over the past weeks.

Question:  Why should we care about retail drug pricing?

Your formulary drug's retail price is what determines when you enter your plan's Coverage Gap or Donut Hole.  When the total retail cost of your formulary drugs (not what you paid, but the retail value), exceeds your plan's Initial Coverage Limit (for example, $4,430), you enter the Coverage Gap or Donut Hole phase of your Medicare Part D plan (where you pay 25% of the retail drug cost).  So, the higher the retail drug cost, the faster you enter the Coverage Gap where you may pay more, less, or the same as what you spent before entering the Gap (depending on your drug plan).

And a Medicare drug plan will also establish cost-sharing at standard and preferred network pharmacies based on the drug's formulary tier. 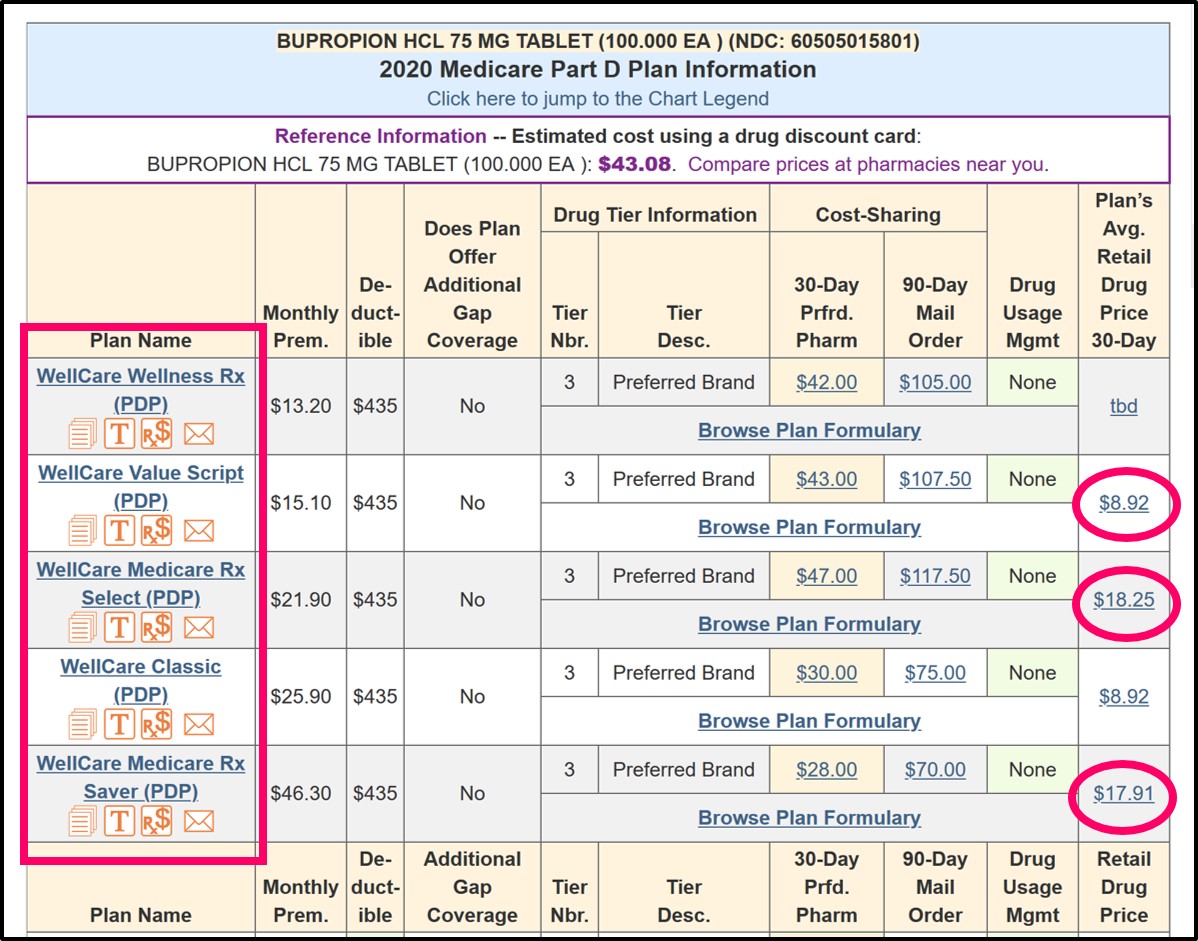 Question:  What happens when the drug's retail cost is less than the plans coverage costs?


You always pay the lower cost - either retail cost or the cost-sharing.  So, in the examples above, you would not pay a $43 co-pay for a drug that has a retail cost of $8.92.  Instead, you would pay the lower retail price of $8.92, even though this is a Tier 3 generic drug.  This is called the "lessor of" rule (you pay retail or your co-pay, whichever is less) and you can read more about this rule in our Frequently Asked Question here: https://Q1FAQ.com/494.html

Question:  How does the quantity of my prescription affect my coverage cost and retail drug cost?

The quantity of your prescription may not impact your coverage cost, but will impact the retail cost based on the number of drugs

So if your Medicare Part D provides a specific Quantity Limit (say, 30 pills for 30 days) for your formulary drug, and your Medicare Part D plan grants you a Formulary Exception for 120 pills for 30 days - the 2019 Medicare.gov Plan Finder shows no impact of Quantity Limits on cost-sharing - however, you will note that the retail cost of the prescription drug is affected by the quantity of the prescription.

The following four Medicare.gov Plan Finder examples show how retail drug pricing and cost-sharing can vary between pharmacies and Medicare Part D plans.
As a note, the following examples were randomly chosen from 2019 Medicare Part D plans available in Florida using common pharmacies found throughout the country.  The actual retail drug price data and cost-sharing calculations were compiled from the official Medicare.gov Plan Finder (as of 12/07/2018).

How are Initial Deductible, Donut Hole, and Catastrophic Coverage Costs calculated in these examples?


Costs in the Donut Hole
The chosen medication is a generic drug and will receive the 75% Donut Hole discount.  The four example Medicare plans do not offer any additional coverage in the Donut Hole, so you would pay 25% of the retail drug cost.

Please notice that the retail drug price at the Preferred Network Pharmacy is actually higher than the retail drug price at the standard network pharmacy.  However, the cost-sharing for this Tier 1 Preferred Generic is $1 at a preferred pharmacy and $10 at a standard network pharmacy.  You can see that the retail cost at the standard retail pharmacy is significantly lower than the $10 co-pay, and since you never pay more than the negotiated retail price, you pay the retail price - and not the $10 co-pay.

This Medicare Part D plan also has the usage management restriction of a 30 tablet / 30 days Quantity Limit (QL).  If the QL can be exceeded (for example, if the plan allows120 tablets / 30 days), the retail price increases by a factor of the QL, but the coverage cost, even for the excess amount of  medication, does not change.


In this example, we see that two preferred network pharmacies can also have different retail prices, although the cost-sharing for this Tier 2 (Generic) is the same at all preferred pharmacies.

In this example, we do not have the usage management restriction of a Quantity Limit.  So the plan member with a larger prescription (120 tablets / 30 days) would not need to file a formulary exception to receive this additional amount.  The retail cost calculation provided by Medicare.gov shows the same multiple of 4 x 30-day costs.

Example 4 - higher retail prices at a preferred pharmacy, but much less than non-network pharmacies

In this example, you can see that at the preferred network pharmacy, there is a higher retail drug price, even when compared to standard pharmacies in our other examples.  We also can see that the Out-of-Network retail costs are over 10x the preferred pharmacy prices.  In most cases, people would not pay such high prices, and would instead pay the pharmacies "everyday low prices" without using their Medicare Part D coverage - or people could use a pharmacy Drug Discount card at this non-network pharmacy.  Please note that the Medicare.gov site shows no coverage at a non-network pharmacy, except for the 37% Donut Hole discount. (This may be considering the requirement that "Part D sponsors shall provide the applicable discount for out-of-network paper claims submitted by Part D enrollees.").