< Previous
Next >
No, but almost all of your coverage.  A Medicare drug plan that participates in the Senior Savings Model offers various types and forms of insulin for a co-pay of $35 (or less) and will keep the low cost-sharing throughout the plan coverage - until the final, Catastrophic Coverage phase - where you will pay 5% of the retail drug price for the remainder of the year.


So, you will pay a $35 (or less) co-pay in the plan's Initial Deductible, Initial Coverage Phase, and the Coverage Gap (or Donut Hole).

However, if you spend over your annual out-of-pocket threshold or TrOOP ($8,300 in 2023 or $7,050 in 2022) and enter Catastrophic Coverage (the fourth and final phase of Part D drug coverage), you will pay 5% of the retail cost (so you may pay slightly more or less than your previous $35 co-pay - depending on the insulin's retail drug cost).

In 2023, the Inflation Reduction Act (IRA) of 2022 introduces a provision similar to the 2021-2022 Senior Savings Model with insulin provided at a $35 co-pay throughout all phases of your Medicare Part D plan coverage (up to the 2023 Catastrophic Coverage phase where you will pay only 5% of the retail price - the Catastrophic Coverage phase will be eliminated in 2024).

However, unlike the Senior Saving Model, the new Inflation Reduction Act will expand the insulin $35 co-pay to all Medicare Part D plans and all Part D forms of insulin covered by the plan - and beginning July 1, 2023, insulin furnished through Medicare Part B durable medical equipment (DME) will also have a monthly co-pay of no more than $35.  Then, starting in 2026, the government can begin negotiating drug prices, so the co-pay for insulin may be less than $35 depending on the negotiated price.
_____________________________________

As an example of how Senior Savings Model insulin coverage can change through the phases of your drug plan,  you can see in this Medicare.gov Plan Finder illustration of the 2021 WellCare Wellness Rx plan how coverage for two different types of insulin is at a $35 co-pay in the Initial Deductible (the 2021 plan's $445 deductible is not applicable), in the Initial Coverage Phase, and in the plan's Coverage Gap (Donut Hole).

However, if you reach the plan's Catastrophic Coverage phase you can see that the Medicare.gov Plan Finder shows that you will pay 5% of retail drug prices for the insulin - and not the $35 co-pay.

You can also see how your $35 co-pay can change in Catastrophic Coverage using our Q1Rx® Drug Finder (https://Q1Rx.com) where you can choose your drug and see how different Medicare Part D plans in your area provide coverage.

In this example we use the medication "NOVOLIN N 100 UNIT/ML FLEXPEN INSULN PEN (15 mls ) (NDC: 00169300415)" covered by 2021 Medicare Part D plans in Florida.  The retail price we show is the average retail price over both Standard and Preferred network pharmacies (so retail prices can be actually higher or lower and change throughout the year). 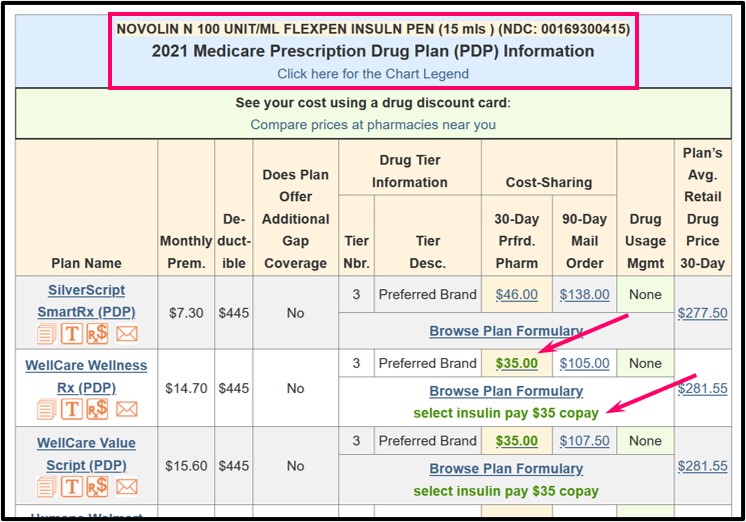 You can "click" on the $35 copay link and see how coverage is handled in different phases of the Medicare Part D plan, in this case, you can see that the insulin is covered at a $35 throughout the first three parts of Medicare drug coverage (Initial Deductible, Initial Coverage phase, and Coverage Gap).  However, you can see that cost-sharing changes in the Catastrophic Coverage phase. 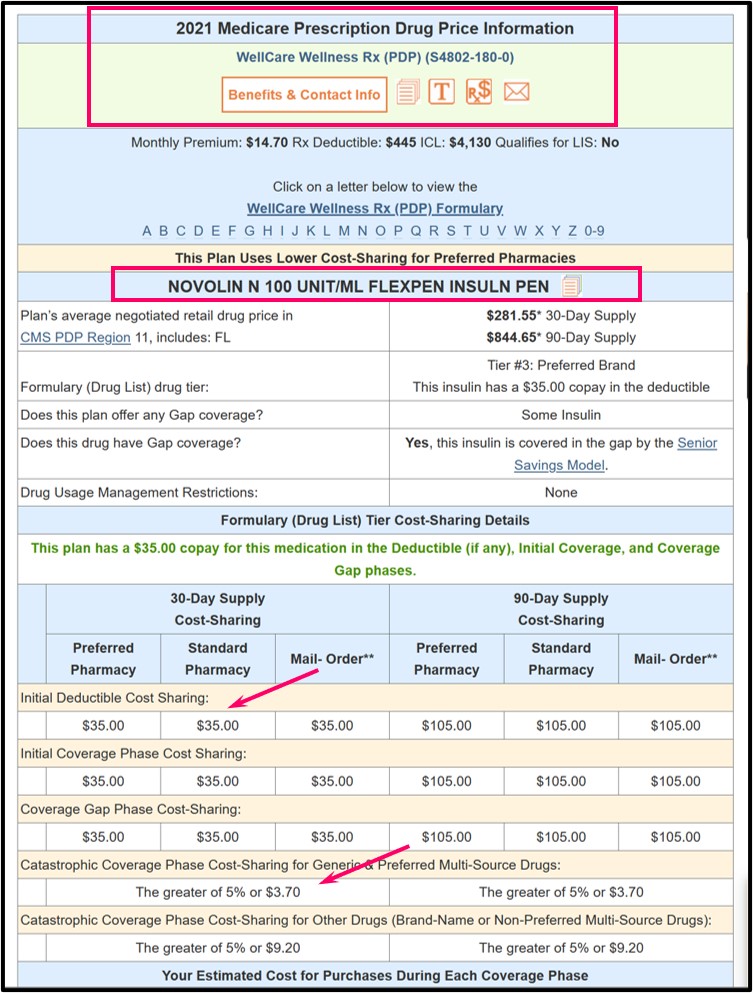 Add your drugs to see plans