About 82% of all 2022 stand-alone Medicare Part D prescription drug plans (PDPs) will have an initial deductible ranging from $100 to $480 with the vast majority of these plans having a $480 initial deductible.

Remember, you usually pay 100% of your initial deductible before your Medicare Part D plan begins to provide coverage - but, see the exceptions below when a Part D plan may exclude low-costing formulary Tiers from the deductible.

Question:  How many stand-alone 2022 Medicare Part D plans will have the $480 standard Initial Deductible? 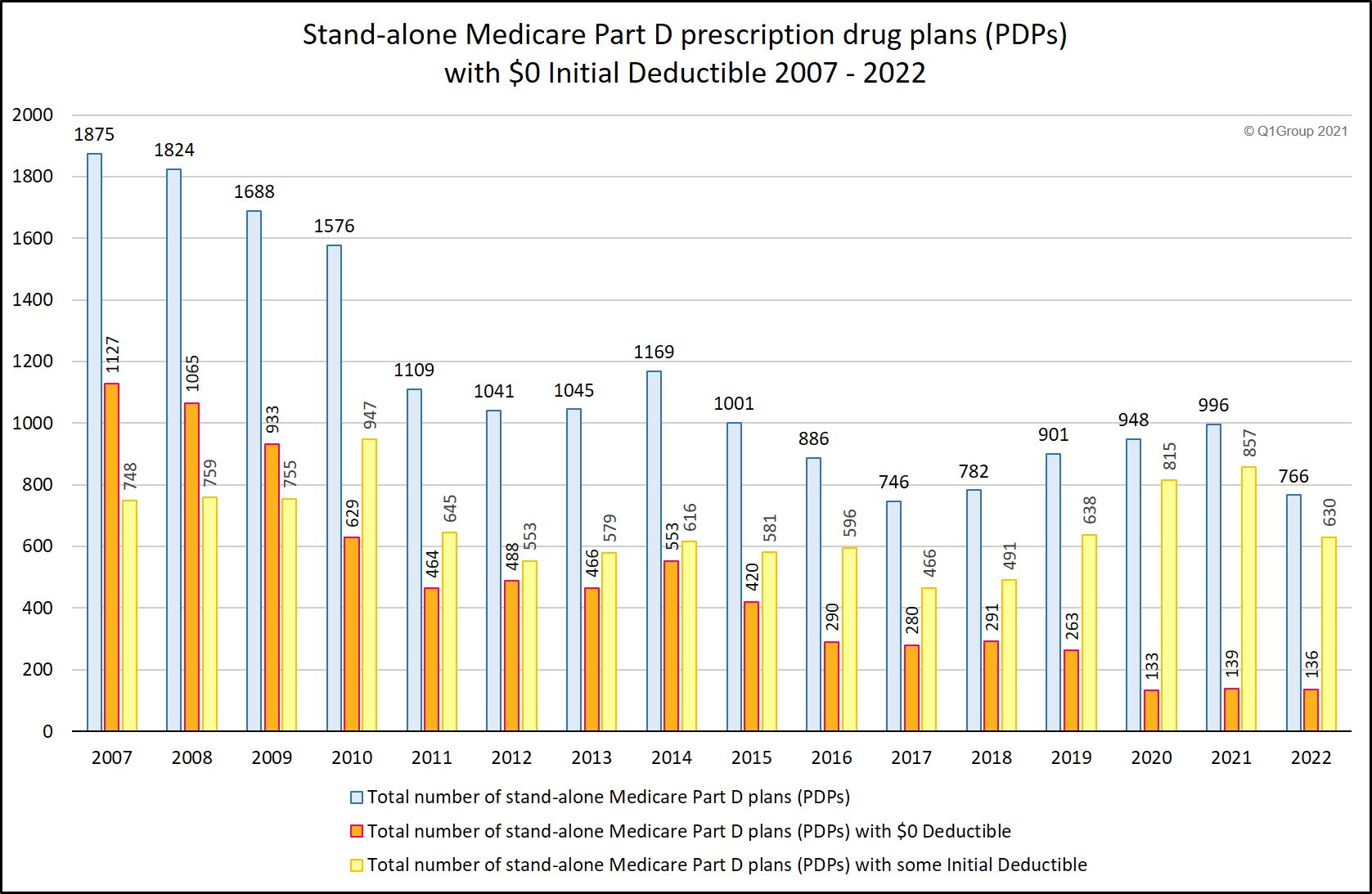 ** Please note that we are not considering Medicare Part D prescription drug plans (PDPs) in U.S. Territories such as Puerto Rico.

For example, your Medicare Part D plan may have a $480 initial deductible, but your Tier 1 and Tier 2 generic formulary drugs are excluded from the deductible, meaning you do not need to pay the $480 before these lower-costing drugs receive coverage.

Editorial Comment:  Having drug tiers exempted from the deductible is a definite bonus for people using mostly low-costing generic medications and who usually did not meet their initial deductible until almost the end of the plan year.  Now these people will have "first dollar coverage" for their low-costing medications, plus the usual Medicare Part D coverage protection should they need any expensive brand or specialty medications costing well beyond the deductible.

Question:  How does this work when certain drug tiers are not included in the plan's Initial Deductible?

If you are still within your $480 initial deductible and purchase a medication such as Atorvastatin Calcium (generic Lipitor®), you would not pay full retail price, but would instead be charged only a copayment for this generic medication (when purchased at one of the Medicare Part D plan’s preferred network pharmacy -- such as a Walmart pharmacy).

Reminder:  Your Medicare plan costs and coverage can (and probably will) change each year.

If you are interested in changing your Medicare plan enrollment, the annual Open Enrollment Period (AEP) for Medicare Advantage plans and Medicare Part D drug plans begins on October 15th and continues through December 7th, with your new 2022 Medicare Part D coverage starting on January 1, 2022.

Not sure where to begin?

If you or another Medicare beneficiary needs assistance understanding how your 2021 Medicare plan is changing or to learn more about your 2022 Medicare plan coverage options, please call 1-800-MEDICARE (1-800-633-4227) and speak with a Medicare representative.