For example, if you purchase a medication with a retail cost of $100 and your Medicare Part D plan pays $70 toward the prescription and you pay a $30 co-payment, the total retail value of  $100 counts toward meeting your Initial Coverage Limit and moves you $100 closer to entering the Donut Hole.

You can view how the standard Initial Coverage Limit has changed each year since 2006 here: https://q1medicare.com/PartD-The-MedicarePartDOutlookAllYears.php.

Important Part #1:
The Initial Coverage Limit only includes purchases of formulary medications.  Purchases of non-formulary drugs, over-the-counter (OTC) drugs, or bonus drugs (such as ED drugs like Viagra) do not count toward reaching your ICL.

Important Part #2:
The retail cost of your formulary medications counts toward your Initial Coverage Limit and the negotiated retail price of a medication can vary at different network pharmacies.  For instance, the medication "Amlodipine Besylate/Benazepril Hydrochloride CAP 10-20MG" is covered by the 2019 Aetna Medicare Rx Select (PDP) at all network pharmacies.  However, the retail costs for a 30-day supply at a CVS pharmacy is $2.27 (preferred pharmacy) and the retail cost for the same medication at a Walmart pharmacy is $19.50 (standard or non-preferred pharmacy) (source: Medicare.gov Plan Finder, 08.10.2019).  So, if you filled your prescription for this medication at a CVS pharmacy, you would have around $17.23 less counted toward the 2019 ICL. 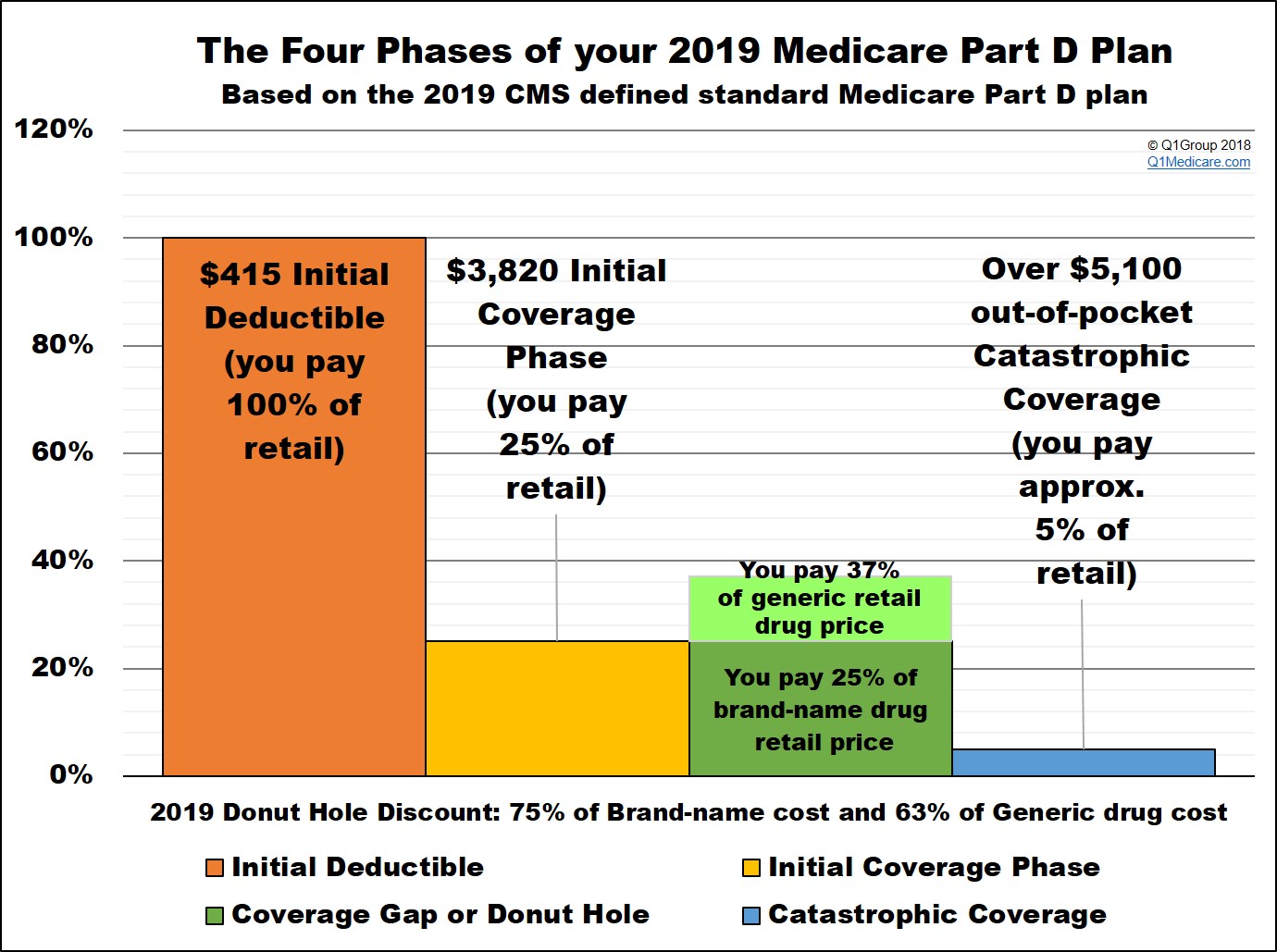 (1) The Initial Deductible is where you pay 100% of your retail drug costs until you reach your deductible amount ($415 in 2019).  Many people will enroll in a Medicare prescription drug plan with a $0 deductible and effectively skip-over this first phase.  The Initial Deductible has no effect on when you enter the Donut Hole, but will affect when you exit the Donut Hole and enter the Catastrophic Coverage phase.

Please note that the Initial Coverage Limit is not measured by what you have spent on medications.  Instead, the ICL is the total retail value of your prescription drug purchases. So this is the amount that you pay for your prescriptions plus what your Medicare Part D plan is paying.

You may find that your plan's retail drug costs are not the same as another Medicare Part D plan's cost. In other words, you might buy a medication like Atorvastatin (10mg) and your plan will have a retail price of $20, although you may only pay a $4 co-pay. However, a friend in another Part D plan may use the same medication and also have a $4 co-pay, but their plan's retail price for Atorvastatin (10mg) is around $7. So, the same medication can have the same co-pay, but different negotiated retail prices depending on the Medicare plan - and so the different retail costs have different impacts on the Initial Coverage Limit.

(3) The Coverage Gap or Donut Hole is the plan phase you enter once you exceed the Initial Coverage Limit and where you were originally responsible for 100% of your drug costs (so this was like a second deductible phase).  However, with the introduction of the donut hole discount in 2011, beneficiaries were no longer responsible for 100% of the cost of their purchases in the donut hole.  You can read more about the current Donut Hole Discount here: https://Q1FAQ.com/470.html

In 2019 the donut hole discount will increase to a 75% discount on brand-name drugs and a 63% discount on generic drugs (you will pay 25% of your plan's negotiated retail cost for brand-name prescriptions and 37% of the retail cost for generics). The Donut Hole will be reduced to a fixed 25% co-insurance cost-sharing structure for all formulary drugs in 2020 and continue at the 25% cost-sharing rate thereafter - at that point, the Donut Hole is considered "closed".

(4) The Catastrophic Coverage Phase is the last phase of your Medicare Part D plan and you enter once your total out-of-pocket drug costs exceed a certain point (over $5,100 in 2019).  During this phase you will exit the Donut Hole or Coverage Gap and will receive your medications at a low price, paying $8.50 or 5% of the retail price (which ever is higher) for the remainder of the year****.