What is the Medicare Part D "Lesser Of" logic?
Category: Retail Drug Pricing
< Previous
Next >
In the Medicare Part D prescription drug program, the "lesser of" logic ensures that Medicare beneficiaries are not paying more than their Medicare plan's negotiated retail price for their drugs - even when their plan's cost-sharing could amount to a higher price.

For example, if your local pharmacy offers an every-day retail pharmacy price of $4 for your prescription (not a sale price) and the retail price is less than your Medicare Part D plan's copay of $8, you will be charged the lower every-day retail price of $4.  In the same way, if $4 is your Medicare Part D plan's negotiated retail price for your prescription, you can expect to pay the plan's $4 negotiated retail drug price and not your plan's $8 co-pay.

Why is the lessor of rule so important to you?


When you choose a Medicare Part D plan, you may find that one of your low-costing medications is now on a high-costing drug tier - and this may cause some undue stress as you contemplate your increased drug costs.  For example, you may use a common medication that has a retail price around $10, but your Medicare Part D plan has moved the low-cost drug to formulary Tier 3 that has a $30 co-pay.  You will not pay the $30 co-pay, but instead, never pay more than your plans $10 negotiated retail drug price.

Examples of the lessor of logic 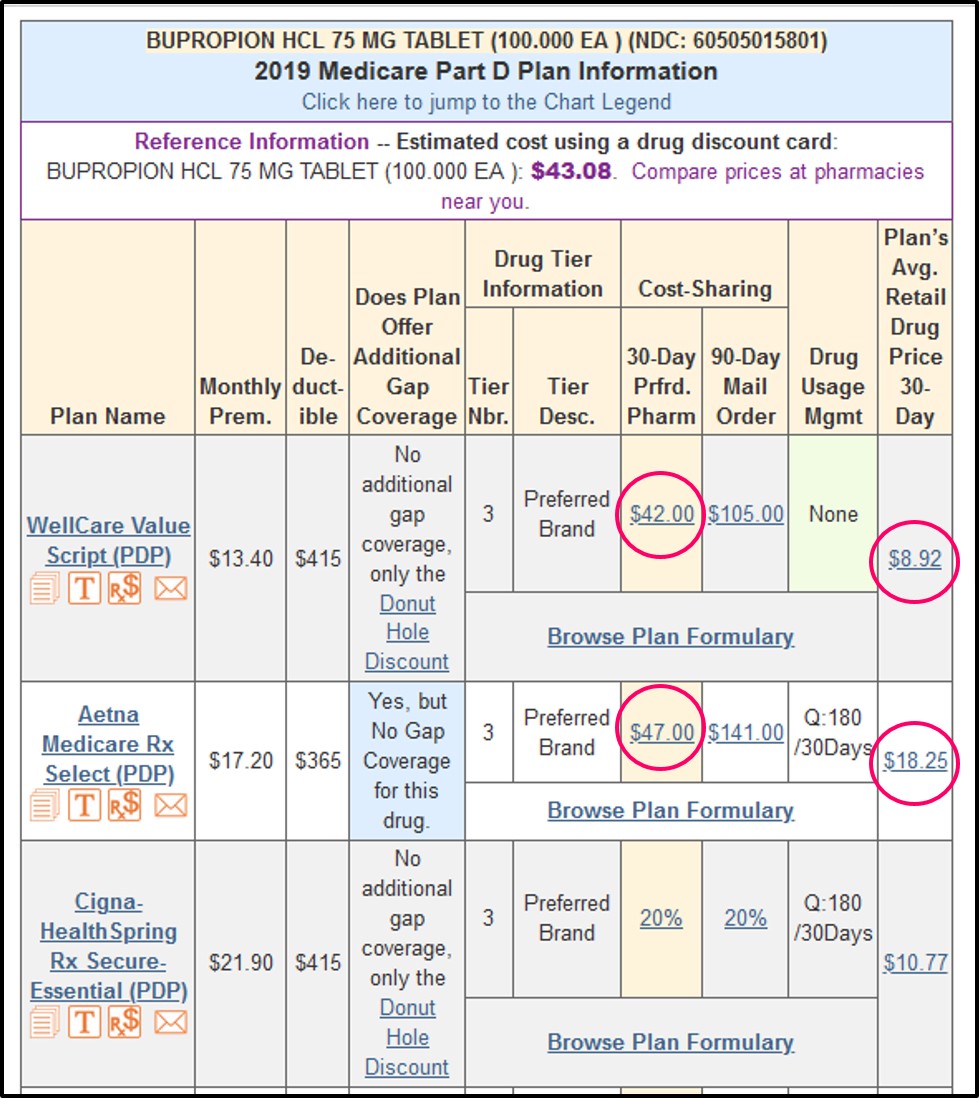 Question:  Where can I find the "lessor of" rule actually stated?

You can find the "lesser of" logic in your own Medicare Part D drug plan's Evidence of Coverage document (the 200+ page book that you received either electronically or printed when you enrolled in your plan) and the rule should read something like:

In this section, CMS holds:

In addition, negotiated prices must include any applicable dispensing fees (discussed in section 20.7 [of the same CMS manual]).  Although negotiated prices do not have to be made available for drugs that are not covered Part D drugs, they must be made available throughout the benefit – including in any phase of the benefit, such as the deductible, in which an enrollee is responsible for 100 percent cost-sharing – for all covered Part D drugs. Part D sponsors must ensure that their payment systems are set up to charge beneficiaries the lesser of a drug’s negotiated price or applicable copayment amount in all phases of the benefit.

Example: A beneficiary’s drug is on a $10 cost-sharing tier. However, the negotiated price of the drug is $4. The beneficiary never pays more than $4.

In addition, uniform negotiated prices must be available to plan enrollees for a particular covered Part D drug when purchased from the same pharmacy. In other words, the negotiated price for a particular covered Part D drug purchased at a particular pharmacy must always be the same regardless of what phase of the Part D benefit an enrollee is in. (To the extent that the negotiated price fluctuates based on fluctuations in Average Wholesale Price (AWP), the actual cost to the beneficiary may vary from purchase to purchase; however the negotiated rate, absent any contractual changes in the reimbursement rate between the pharmacy and the Part D sponsor, will remain constant for that drug.)"

This same "Lesser of Logic" concept was also repeated in other CMS examples:

Suppose your Medicare Part D plan has a $310 initial deductible (that is, you pay 100% of the first $310) and now you only have $75 remaining before you satisfy this Initial Deductible.  You need a refill for one of your [Tier 3] medications and your drug purchase has a negotiated retail cost of $100.  During your Initial Coverage phase, the co-payment for this Tier-3 medication is $40 (or you pay $40 and your Medicare Part D plan pays the remaining $60).

So in our example, you would pay the first $75 to leave the Initial Deductible phase and then have $25 that was left over [from the original $100 drug cost] in the Initial Coverage phase [this transaction is also known as a "Straddle Claim"].  Since the remaining $25 retail cost is less than the $40 co-pay, you would pay the $25 for a total of $100.  You would not pay the $40 co-pay because your total would then be $115 - which is more than the $100 negotiated retail drug price.