The cost of a drug purchase that crosses two or more parts of your Medicare Part D plan coverage is calculated using a combination of retail drug cost, co-payments, Donut Hole Discounts, or Catastrophic Coverage costs - but no matter what the calculation, you will never pay more than your plan's negotiated retail drug price.

Changing the example above slightly, if you have an initial deductible of $480 and you purchase a Tier 3 drug with a $500 retail value, you would first pay $480 to meet the initial deductible, then you would have a balance of $20 ($500 - $480) that would "straddle" or carry into your next coverage phase (the Initial Coverage Phase) where you have a $47 co-pay on Tier 3 drugs.  But, you would not pay an additional $47 co-pay for the $20 balance that "straddled" into the second phase of coverage - because your coverage cost would then be higher than the drug's retail cost.  Instead, you would pay no more than the $500 retail drug price or ($480 + $20).

A quick review of your Medicare Part D plan coverage

2021 Example: If you purchase an expensive prescription medication, such as Zytiga ® (that has a retail cost over $10,000),
the cost of the first drug purchase would be calculated as a straddle claim added together across all parts of your Medicare Part D coverage: the Initial Deductible - the Initial Coverage Phase - through the Coverage Gap (receive the 75% brand drug discount) - and end in the Catastrophic Coverage phase.

For a $10,000 brand name formulary drug that was the first purchase of the year, the Medicare beneficiary would pay around $2,751.

And any additional purchases made for the remainder of the year would be in the Catastrophic Coverage phase costing 5% of the $10,000 retail price ($500) for each prescription. 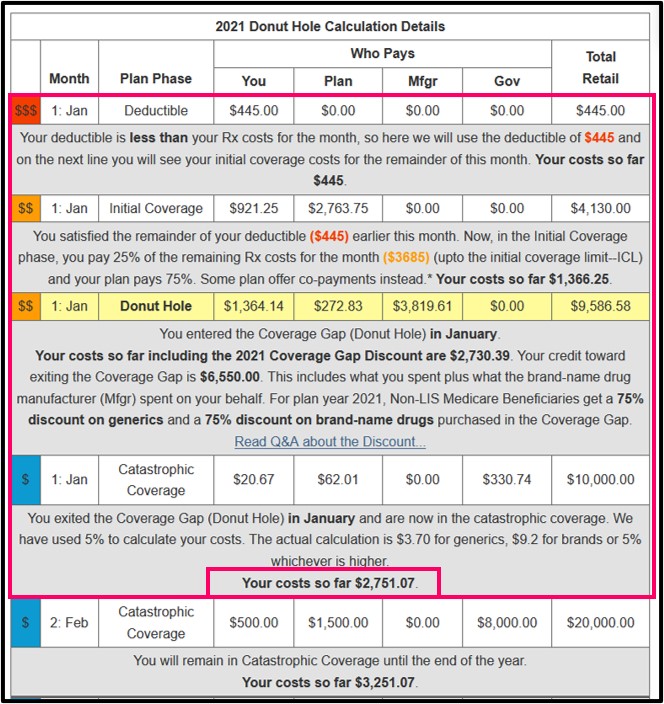 For more examples of Straddle Claims you can click here to see our Medicare Part D article.

Have a Medication Not Covered by Your Plan?
Prescription Discounts are
easy as 1-2-3
» Compare prices at pharmacies near you.
Your drug discount card is available to you at no cost.